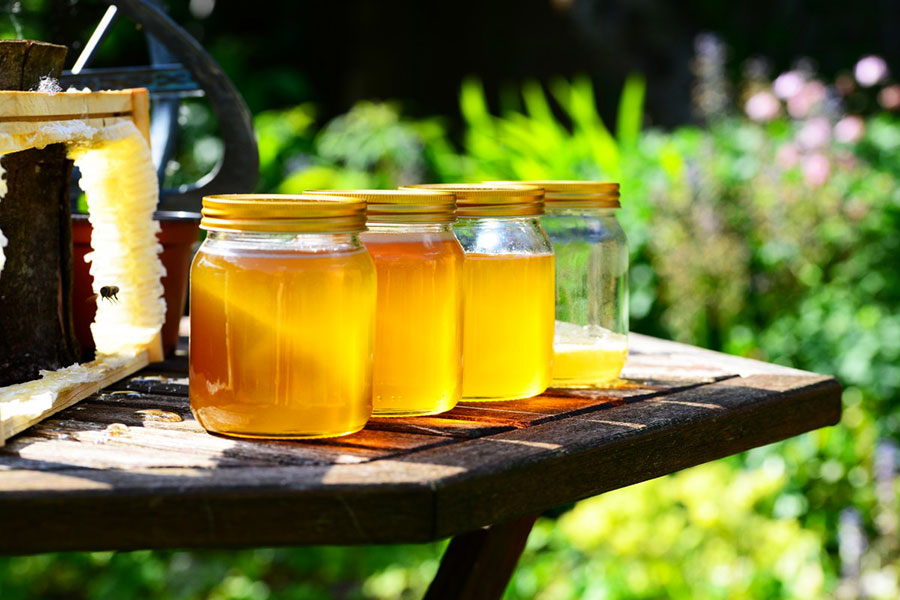 The gastronomy of the Cévennes

The Cévennes are a region full of quality farm products. Not so long ago, due to their remoteness from other homes and activities and lack of resources, the population of the valleys and slopes was driven to the need for food self-sufficiency. As a result, many local products have retained the know-how and taste of tradition by need.

Parddon is an original brand of a small cheese made from raw goat's milk. It is only produced in the Cévennes region. It is a small cheese with a diameter 6 to 7 cm in diameter and about 2 cm in height, it contains 45% fat. Based on raw goat's milk, it weighs on average 60 grams. Its natural white ivory paste has a homogeneous texture and a smooth cut-out appearance. It becomes britter when the ripening continues. So it can be fresh, creamy or dry and can be eaten at room temperature

As because of the abundance and variety of wildflowers that line the companions, to the delight of the bees, this country offers a honey of great medicinal value of great quality and a significant nutritional compensation. Bee breeders extract wild swarms from the wild, spreading them in special hives, carved into trees and covered with a hat with the same wood. In the highlands of the Cévennes, beekeepers can produce honey from heather, chestnut and white heather. In the plain, bees forage for nectars from flowers to make honey, any flower. The honeys made will be honey of lavender, acacia, rosemary, thyme... they therefore produce monofloral honey. A harvest of local honey of very different taste and incomparable flavour is guaranteed.

Stock sweet onion from the Cévennes

The sweet onion of the Cévennes is grown in a demarcated area in the Cévennes. It is the pride of the Cévennes. The sweet onion has a controlled designation of origin (AOC) and a protected designation of origin (AOP). This vegetation has found in the acidic, sandy and low clay soils of the Cévennes, a perfect territory to thrive. Set to the ground in February on rugged terraces or narrow plots, transplanted in the middle of spring on sunny and well-ventilated terraces, the sweet onion is harvested by hand during the summer. In its pearly colour, it offers a sweet taste of sugar, a delicate texture and also juicy. Overflowing with minerals and trace elements, the sweet onion has health benefits. It is distributed in the markets from August until April and is a faithful companion of the cuisines of restaurants and campsites surrounding. It is eaten cooked or raw, and also in the form of processed and high-end products, all year round

The Anduze sausage is a sausage about 40 centimetres long. Also called raylet it is sold fresh or dry. It is based exclusively on pork. The flesh of pigs owes its taste, not found anywhere else, to the diet of these animals: acorns, chestnuts and other forest products. The sausage that farmers once made has kept its flavour, thanks to the know-how of local butchers who jealously preserve the secret of their own seasoning.

All the years in October, Anduze celebrates the chestnut festival, the symbolic tree of the Cévennes. In the past, the famous Jupiter coveted an attractive beauty called Nea. The latter chose to die instead of living virtue. To solemnize this sacrifice, a tree was implanted on the tomb of the nymph, it was the chestnut tree, the Castanea (chaste Néa). Chestnuts or chestnuts? Both fruits come from the same type of tree, the chestnut tree which produces many varieties. Only, they differ by its envelope and its shape, if it is partitioned, then it is a chestnut, otherwise it is a chestnut. The village is transformed into a gigantic market of flavors with multiple animations around the chestnut. The ceremony takes place in two popular festivals: the chestnut and soup festival. It's definitely, these are popular festivals with its accents and traditions Cevenoles.

Enjoy the Golden Lamb of the Gard

During the year, the sheep feeds on fresh herbs collected on the paths of the arid land or mountains. In autumn the herbs will be mixed with chestnuts and acorns in autumn. Accommodating with the way of raising herds, production is irregular and inconsistent throughout the year. There are two cycles of lamb birth, in late summer, after the return of transhumance and then at the end of winter. The Terres d'Or lamb will be distributed to the market in late November until February and for the second period towards the end of April to September.

Fruit of the olive tree, the olive arrived as early as the High Antiquity in Provence and Languedoc. Olives were very popular in Roman times. It continued to be consumed during the Middle Ages until our era. There are different species of olives such as Lucca, or Picholine grown specifically in the Gard. It is no coincidence that the Romans came to Anduze to make it the second city of the Gard after Nimes. Their country sent them to develop the cultivation of vines and olive trees already known by Anduzians thanks to the Phoceans. With a firm flesh, it is characterized by its oblong shape and the finesse of its core. The most discerning gourmets can enjoy the remarkable flavour of the Anduzian olive from October, the month of the olive harvest in the region.

Stock up on Anduze olive oil

The growers harvest green olives from September to February. As they mature, the fruit is obtained in oil and turns into black. This olive is used for the production of an oil highly prized for its fruity flavors and herbaceous notes of hay. It is also appreciated for the health benefits it brings. The oil is obtained from the traditional traditional cold pressure process that allows its natural evacuation. The olives are put in the mill where they are transported to the milling grinders which turn them into thick paste. This paste is subject to cold mechanical pressure, it is the essential phase of the production of olive oil that will only have to be decanted after that.

The tapenade is a traditional recipe emblematic of Southern cuisine. Made from black or green olives, it is traditionally pounded in a mortar with olive oil, anchovy fillets, capers, garlic, mustard and herbs from Provence. It is used in table art and for the accompaniment of aperitifs. It is mainly served on small grilled canapés, rubbed with garlic and cooled. A real delight not to be left out,

The ceps are certainly the mushrooms most sought after by amateurs. You can start picking the mushroom king in the forest, from September until the beginning of November. As a precaution, you should always seek the advice of a pharmacist for the authenticity of the plant. Connoisseurs may be able to get some Caesar amanites, girolles, chanterelles or streamers, if you can't find ceps.

Dedgus Modestine's Sabot, a delicious cake made from red fruits, hazelnuts and almonds, specially created by local pastry chef R.L. Stevenson to promote his village of Saint-Jean du Gard. He refined these ingredients during his journey with a donkey, which brought him in the autumn of 1878 to the Gard region.

Le Gard is a wine region where A.O.C. wines are produced from the Gard and the Pays d'Oc. Due to the rainy climate and the frequency of spring frosts, winemakers set up their vines only on the best exposed terraces. Because production is not plentiful, it will often be reserved for local consumption. However, viticulture remains the centre of agricultural activity in the Cevenol foothills and the Ceze Valley. The vines are mainly found on hilly plots, secondary land composed of fertilizers that take turns with limestone benches. The vineyard area covers 13,000 hectares of land, representing 20% of that of the Gard department, which is France's 4th largest department. The southern black grape varieties represent: Syrah, Grenache, Carignan or Cinsault. In the last twenty years or so, Merlot or Cabernet Sauvignon have been added. Traditional white grape varieties often unite Grenache and Clairette. Over time, he has been enriched with Sauvignon, Thistdona and Viognier. The micro-climate of this region, with its particular irrigation regime and its marked variations of heat during the ripening period of the grapes, makes it possible to produce wines distinguished by an aromatic intensity, a finesse of the tannins and by an amazing freshness.

The collection of wines on offer is very wide:

Degu the products of these vineyards from local restaurateurs, producers, winemakers and local traders during your holiday at Le Domaine de Gaujac.